More Life in the Garden

21st - 23rd MAY 2010
I've spent a lot of time in the garden over the past few weeks, mainly finishing the pond and adding a bog, and clearing some of the ivy-covered wilderness further from the house. This has brought me closer than usual to the garden wildlife.

The nest box nearest the house has been taken over by a pair of Blue Tits. Their venture came close to disaster last Friday. I was alerted by their alarm calls, and went out to find the nest box on the ground with one of the neighbourhood cats standing over it. The cat must have climbed onto the box, and his weight broke the rather flimsy fixing. I lodged the box in the bush close to the original location, but the adult Tits wouldn't accept it because it was in the wrong place, so after half an our I tried another approach. The top half of the box front is removable, so I unscrewed it to allow me to drill a new fixing hole and hang the box back in its original location. It also allowed me to see the five or six tiny, bald chicks. With the box refitted, the adults immediately started bringing food again. To protect against further interest from the cat, a barricade of holly branches was provided! 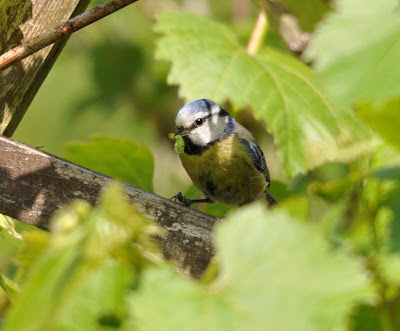 Until last week, a pair of Great Tits had a nest in the fence between our garden and the neighbours'. The approximate location was evident from the noise of the chicks. Then one day all went quiet, suggesting the chicks had fledged. However we saw no sign of them on the feeder as we have in the past, and about the same time a pair of great Tits started bonding displays and checking out nest boxes. Was this the same pair, recovering from the loss of their brood to a predator? 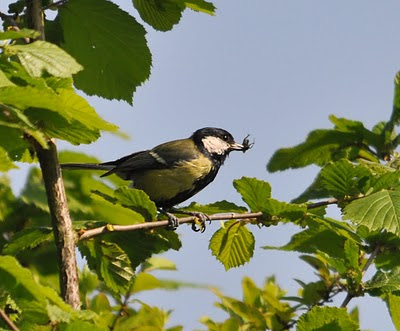 The Wrens, having been evicted from a nest box by the Magpies, are now interested in another nest box. This Wren has seen me, and is wondering if I have seen him! 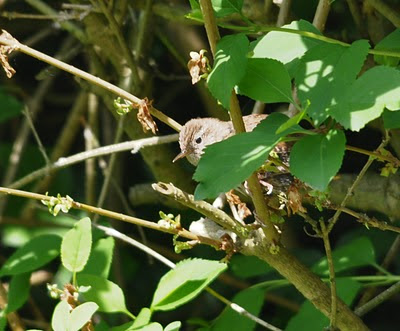 A family of Long Tailed Tits appeared in our garden yesterday, and has been here ever since, roosting overnight in the Rhododendron, and investivating the bushes, the pond, the trees, the vine, and anything else that takes their interest. Being newly fledged, they are quite tame (and not very good at keeping their feathers tidy!). 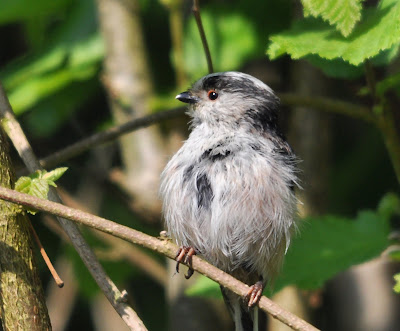 The Damsels were busy finding mates and laying eggs. 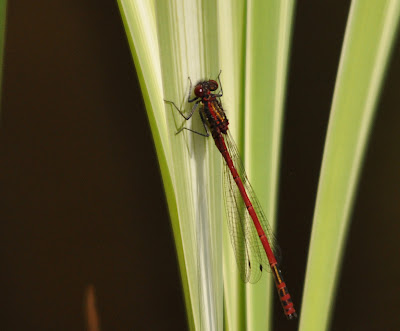 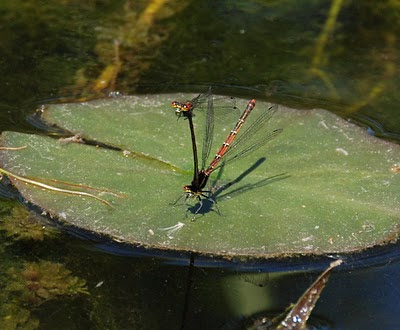 While clearing ivy and rubble from the ground, I disturbed frogs and toads of varying sizes and colours. I think I counted seven over two days. In most cases, they were caught and put safely among the rocks by the pond. 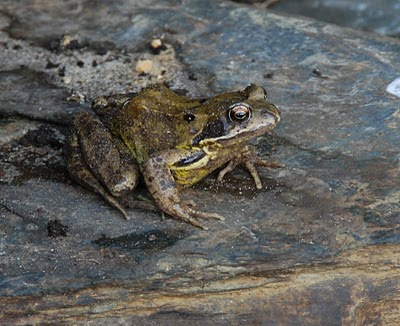 On Sunday morning I was in the garden and heard a flapping of wings followed by quacking. No sign of any ducks though. Eventually I located the source of the noise: on our neighbours' roof! It was a male Mallard, and stayed there for about ten minutes, quacking in short bursts.
My theory is that this is the Mallard that regularly came to our garden until recently, and he has lost his mate and was checking old haunts in an attempt to find her. A good story, anyway. 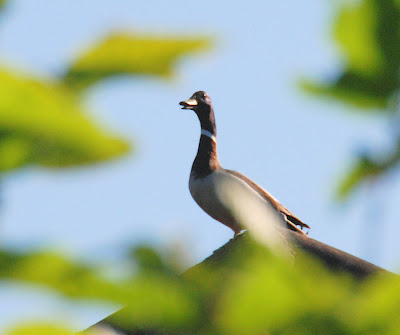 Another find under the ivy was what appeared to be a Bumble-Bee nest. I moved the nest material (mainly leaves) to a new location, and they seemed quite happy to go too. There's quite a bit of bird activity in our garden at the moment. The pair of Mallards visit our pond most days for a couple of hours. A Blackcap comes across from the other side of the railway to get a drink of water from an old washing-up bowl. The Tits, Robins, Dunnocks, Pigeons, Magpies, Jays, Goldfinches, Nuthatches, Woodpeckers and others regularly come to feed. The Great Tits are nesting in the neighbour's fence. But best of all is a pair of Wrens who are currently filling a nest box with moss and feathers. 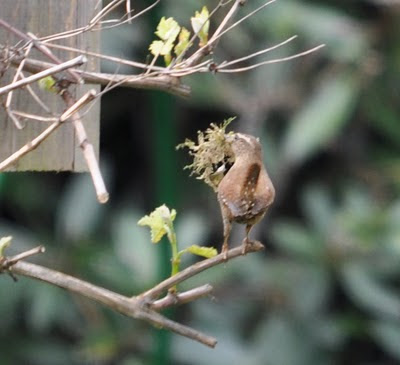 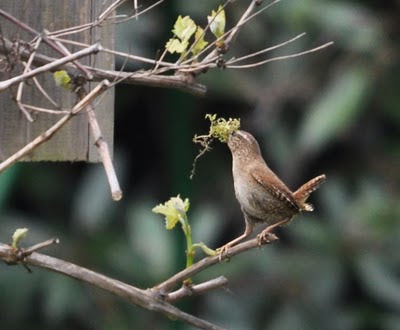 Wren update 9.5.2010: Returned from weekend away to find Magpie had harassed the Wrens enough to frighten them away. Moss and feathers from the box were spread over the lawn. I had seen the Magpie doing it before we went, and tied some holly over the box to make Magpie access mre difficult.
I noticed that one of the Great Tits on the feeder had non-standard markings around the back of his head. 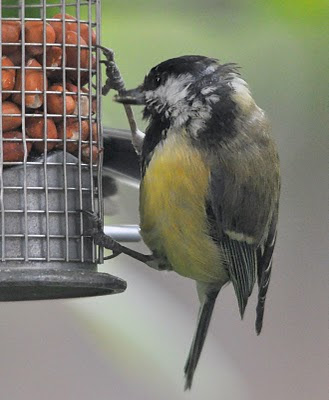 April out, May in.

Today's report covers several of my regular haunts visited at the end of April and the beginning of May.
PAINSHILL, 27th APRIL 2010
The visit started well photographically with this spot-on framing of a Mallard in flight. 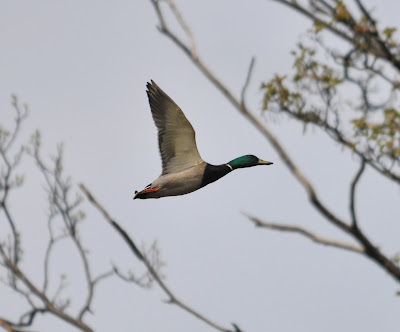 Mr Grebe returned from an expedition to the other end of the lake, and was welcomed back with a little display. 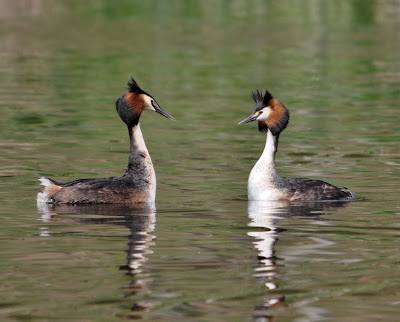 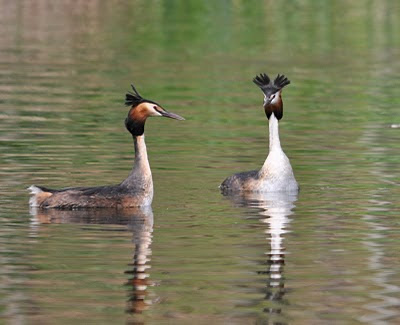 They then started trying to build a nest by gathering branches and reeds and dropping them in the middle of the lake. It didn't work, needless to say. 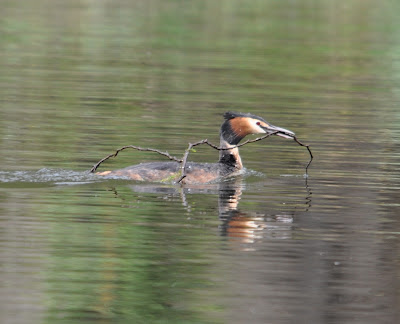 But they did take time off from their labours to exchange gifts of weed. 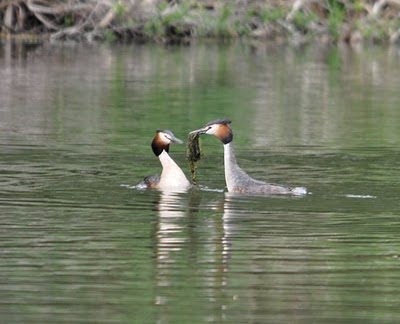 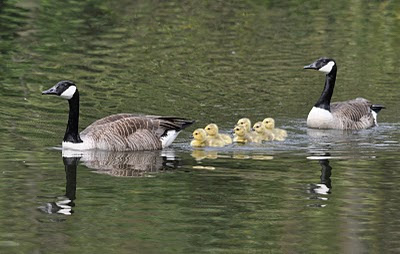 In the north lake, a single Grebe was foraging, preening and stretching his beak. Possibly he is the survivor of the original pair. 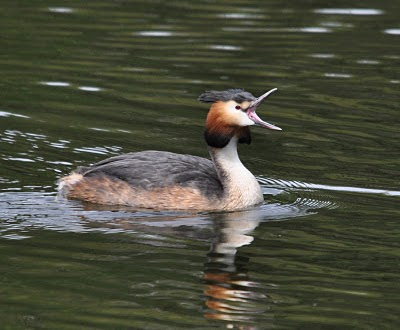 And by the car park, a couple of Jackdaws were prodding the field for titbits. I got a rather dirty look from this one when I took his picture. 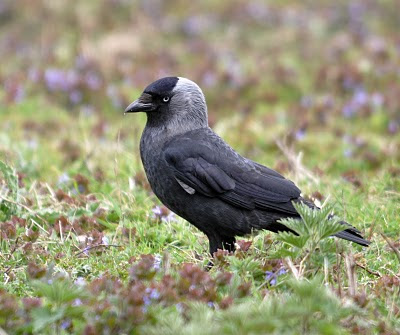 CRAWLEY, THURSDAY 29th APRIL 2010
One of my favourite lunchtime spots when I worked at Crawley was Buchan Country Park. I called in while visiting Crawley for a leaving party, and found the Grebes incubating at their usual nesting place. 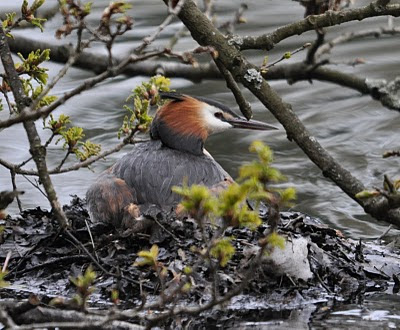 PAINSHILL, FRIDAY 30th APRIL 2010
By now there are goslings everywhere. When I lined up for this picture, the furthest left of the goslings was still on mum's back under her wing, and he struggled out and got into position with his siblings. The third gosling took fright and hid his face. 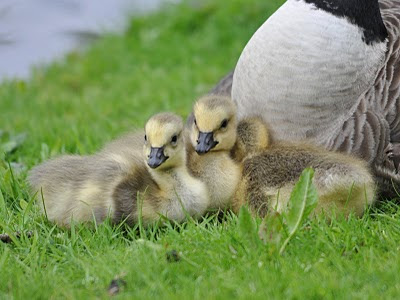 This Mrs Mallard seems to have a rather mixed parentage, and this shows in the varied colour patterns of her ducklings. 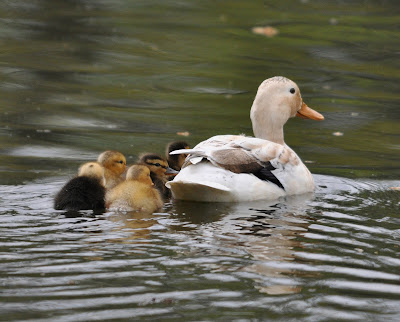 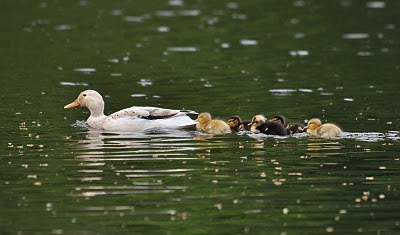 A Grey Wagtail was still busy collecting insects around the Grotto. There only seems to be one adult at any time just now, suggesting that the eggs are still being incubated. 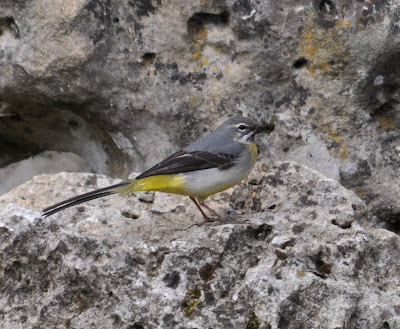 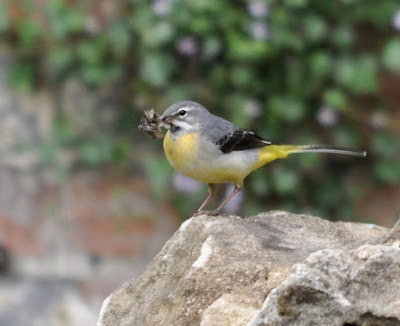 The pair of Grebes seemed to have given up ideas of nest-building for the moment, and were taking a grand tour around both lakes. There was no sign of the single Grebe. 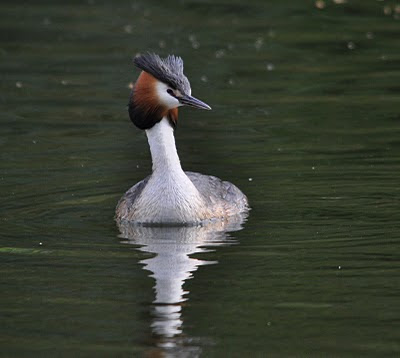 Not to be outdone by the Canada Geese, this Greylag family gave a prefect display of precision formation swimming. 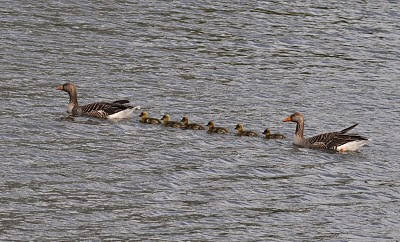 As I returned past the Abbey Ruin, I was pleased to have the opportunity to offer my best wishes to Mahinda & Mariyam, who were in Indian dress being photographed following their Tamil Indian marriage ceremony at Painshill.
IN OUR GARDEN, SATURDAY 1st MAY 2010
We are still getting regular visits from Mr and Mrs Mallard. They call in most days, and usually stay for an hour or two. 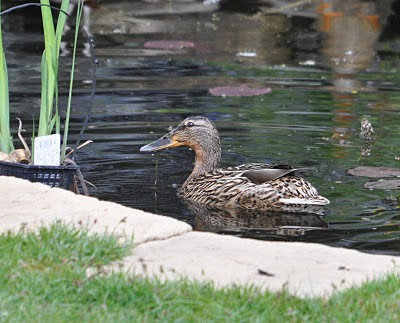 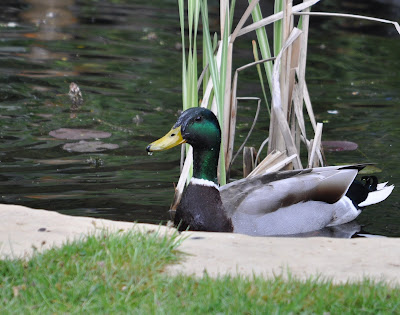