We've had a number of interesting and colourful visitors to our garden recently, and here are some of them.

Last week we had a visit from a pair of Redpoll. They used the niger feeder for a while, and this one is waiting his turn. I haven't seen them here before or since. 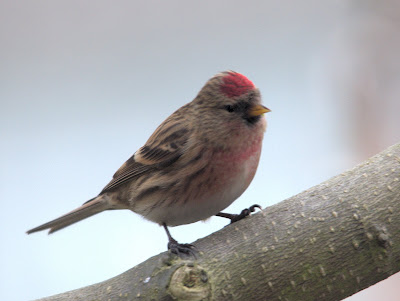 I've also briefly seen a Siskin, but it didn't wait for a picture. The Goldfinches come every day now, usually to the niger feeder, but this week they discovered the lavender in the front garden, and have been clearing that of seeds. 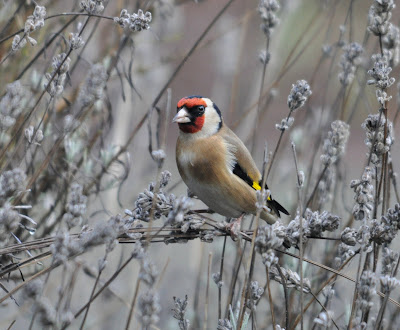 I looked out of the front window this morning, to see a Green Woodpecker down by Anne's car, digging the soft earth by a rotting tree stump. I presume it had found a nest of ants or some other insect, and it was so intent on what it was doing that it didn't notice me opening the window for a better picture. 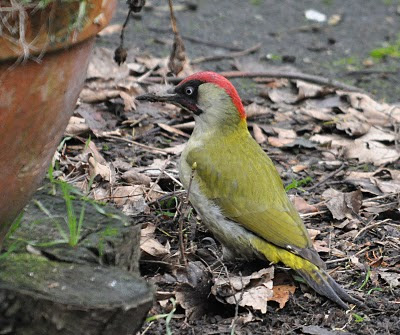 I won't try to pretend we have a lake in our garden with Goosander on it, but Painshill is quite close to home, and I do seem to have spent rather a lot of time there this week. This picture of a Goosander leaving was taken just as I arrived there yesterday. 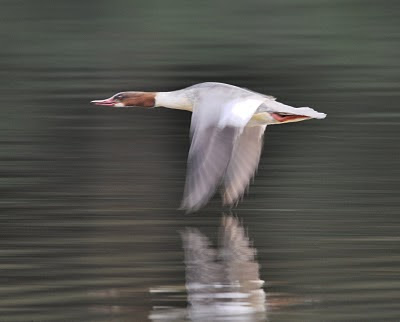 I finished work at 1pm, the sun was out, so I decided to visit Painshill Park again. My first two visits had both been brief, but I was sure that a couple of hours there on a sunny afternoon would be time well spent.

As I left the visitor centre past the restaurant, I heard the familiar sound of a Goldcrest nearby. Sure enough, there he was, right by the picnic tables, flitting through some newly-planted hedging looking for insects. I followed him with the camera but wasn't quick enough to get a picture. I'll get you next time!

Two things were clear as I walked around the lake; there were no Goosanders, and there were an awful lot of Swans! I did think I might see a Swans' mating display, as one pair was fondling and rubbing necks. But then a third Swan swam towards them with his wings in galleon formation and his head down, and went right between them! Presumably it was his way of saying "Get away from my daughter!". 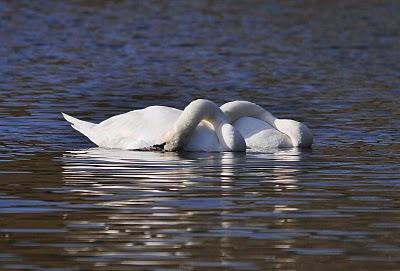 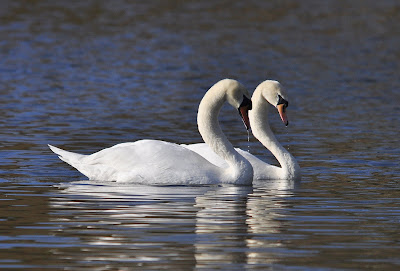 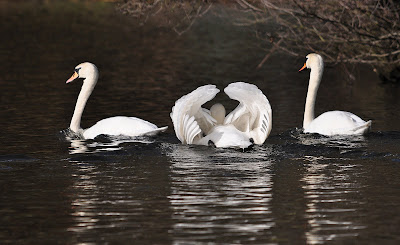 I went over the bridge to the island, and there on the hidden part of the lake was a small group of Goosanders; six male and two female. I set up camp to watch them for a while. They were quite contented doing what Goosanders do; catching fish, preening their feathers, ....... 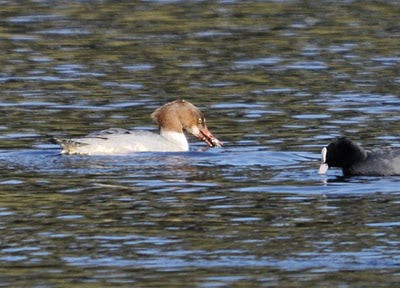 A male Goosander stands up to direct the Gadwall traffic? 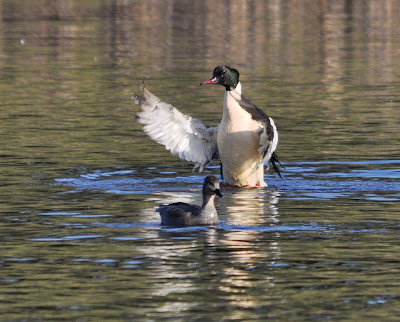 The Goosanders hold a conference. 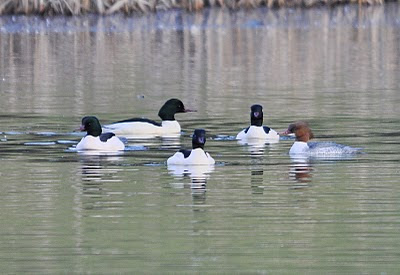 Then over the hill came a cohort of mums with buggies, power-marching towards the lake. 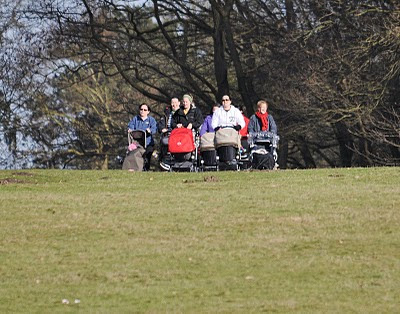 This was all to much for the Goosanders, and they made their escape while they could! 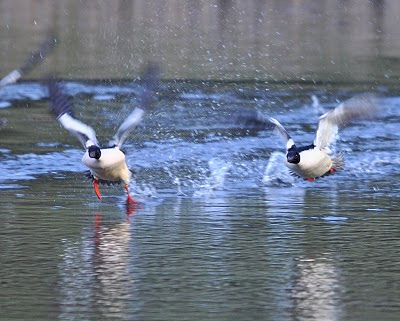 I had also seen a lot of Egyptian Goose activity by the lake, and their favourite roost seemed to be high up in a large, mature Pine tree. At one time there were at least five up there. 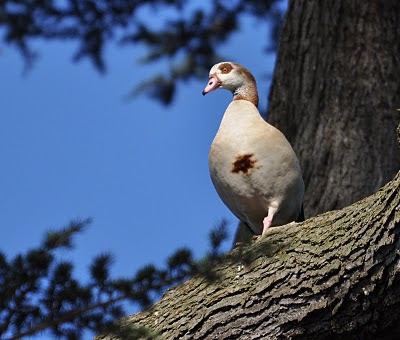 All the time I had been watching the Goosanders, a Heron had been standing patiently beside the lake. Now he decided it was time for him to fly away. 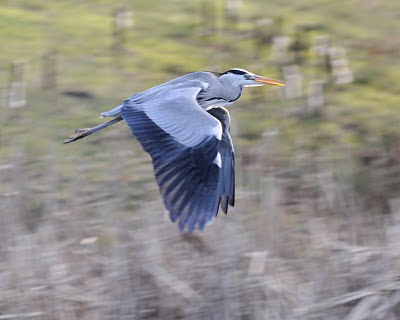 Everywhere I went around the park I encountered small flocks of Long-Tailed Tits, flitting through the trees looking for food. This was my best LTT picture of the day. 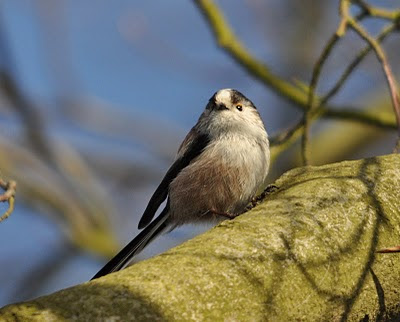 I heard the beautiful song of a Mistle Thrush on the island, and walked over to try to see it. Suddenly all the birds went quiet, except for the distinctive cry of a Buzzard as it flew over. 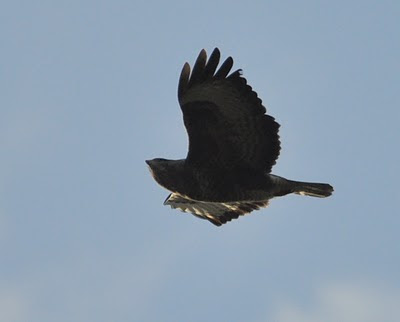 On my way out I encountered the two ducks with their tongues hanging out (see Monday's blog), but I'll spare you another picture of them. They seemed ok, mixing happily with the other Mallards.
1 comment:

I was in need of a walk at lunchtime and headed to Painshill again. Today was a "free entry" day and I was pleased to have the company of numerous groups of young mums with pushchairs. As I arrived it started drizzling, and by the time I got to the lake it was raining quite hard. My perseverence was rewarded however, by the presence of a flock of between ten and fifteen Goosander, males and females. 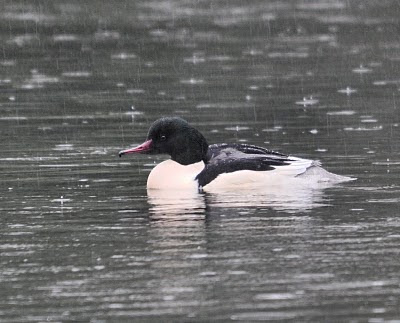 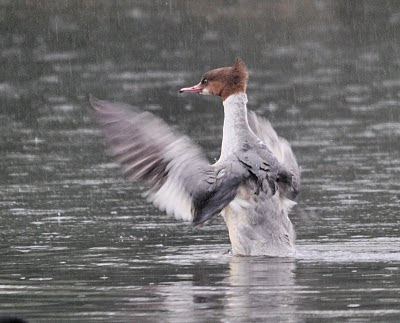 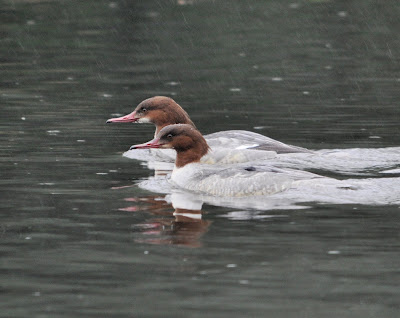 I stayed just long enough to take a few pictures before hurrying back to the car to dry out my coat and camera!
No comments:

A brief lunchtime visit to Painshill. I had seen on Phil's blog that there had been Goosander at Painshill, so as it is only 5 minutes from home and it was a sunny day, I though I'd pop down there at lunch time. The Goosander had gone, but I wasn't disappointed as there was plenty of  other bird activity. I hadn't even reached the entrance when I saw a small flock of Redwing down by the River Mole, foraging among the fallen leaves and twigs. 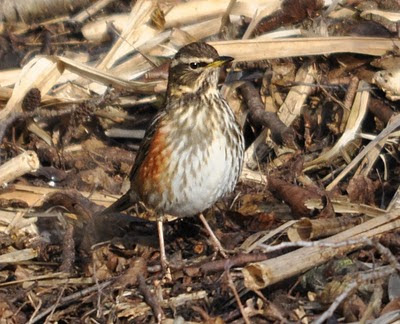 Also from the Mole footbridge, I could see a mixed flock of finches in the trees; Goldfinches and probably Siskin and Redpoll too. 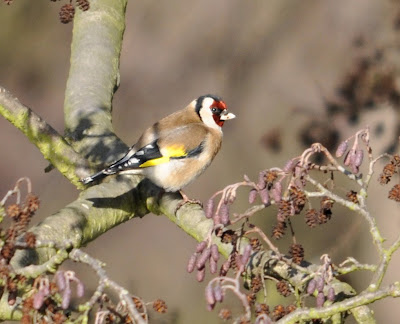 Once inside the park, I found the lake largely frozen, and watched Swans and ducks on the ice and in the water. There was also a lot of activity from Long Tailed Tits, which I never tire of watching, and Nuthatches. 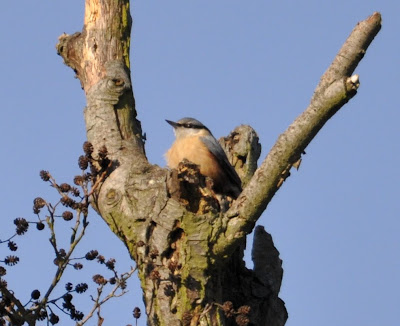 Coming back through the woods, a Buzzard was calling, but didn't show himself. Then I saw a Greater Spotted Woodpecker in the trees, and spent a few minutes trying to get a decent picture. 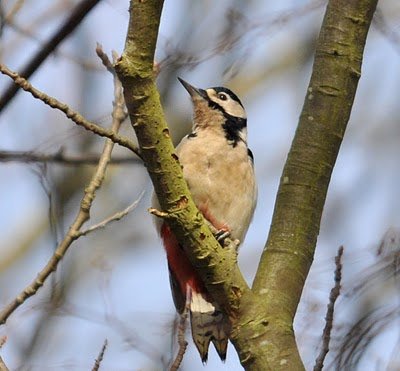 Another enjoyable five minutes was spent with this friendly Robin, who was difficult to photograph because he kept coming so close! 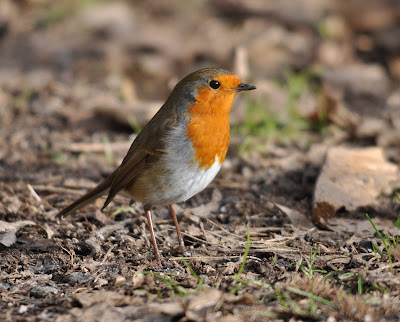 Then several Mallards came waddling up, presumably hoping to be fed. I thought they must have been very hungry, as two of them, a male and a female, had their tongues hanging out. On closer observation, it appeared that they both had a hole in the lower half of their beak, through which the tongue had fallen. Perhaps a genetic defect? They seemed to be feeding successfully. 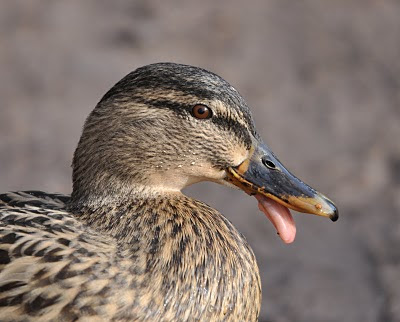 It was an enjoyable, if short, visit, and I shall be back. I was also pleased to bump into Tricia while I was there (I had met her before at WWT Barnes), and she gave me a useful summary of Painshill's birdlife throughout the year. So tempting was it, in fact, that it was just the extra incentive I needed to sign up for a year's membership of Painshill, which I had been contemplating doing for some time. Thanks Tricia!
No comments: