The forecast was for good weather, so I set off in the morning to Kempton , where I hadn't been for some time. When I arrived, a Buzzard was prowling nearby, which could be considered a good or a bad omen, depending on point of view.


The lakes were all frozen over, so other than a few moorhens and a swan, there were no water birds to be seen. In the reed beds however, the Reed Buntings were having a field day.

I stopped off in Addlestone for some purchases, and noticed a parade of shops with traditional roofs and lots of House Sparrows.

Mid afternoon, to Woking to see the Owls. I wasn't disappointed!

It was a bright, sunny morning, an ideal day for a visit to Staines Moor, so I thought. How wrong could I be! I set off in an icy wind which cut right through me, making it unpleasant just to keep my head up and my eyes open. The wind also seemed to be keeping most of the wildlife under shelter. The only ones unaffected were the Dabchicks, which spend most of their time under water, but as usual they dived as soon as they saw me, and I was too cold to stand waiting for them to reappear.

Eventually I got close enough to some wagtails for a picture, and also found several pairs of Mallards sheltering together in a clump of water plants. And that was about it, apart from a Robin, a Green Woodpecker, and a passing flock of Fieldfare.

Then a herd of cows came towards me, bellowing loudly, so I beat a prudent retreat.
No comments:

A sunny day in Cobham

It was a beautiful morning, so I was up and out early. I started out waiting for a Kingfisher on the Mole, but it didn't materialise and I couldn't resist checking if the Little Owl was in its tree. It was.

Then on to Painshill Park, where a couple of days earlier I had counted ten Goosanders, including three females. They were all still there.

All the regulars were there. I was particularly pleased to see Mr Dodgy Duck, who together with his sister Daffy, has what appears to be a split lower beak mandible through which his tongue permanently hangs. I first saw them three years ago, so I presume it doesn't inhibit them too much. The fact that there are two of them suggests that it is a genetic defect. 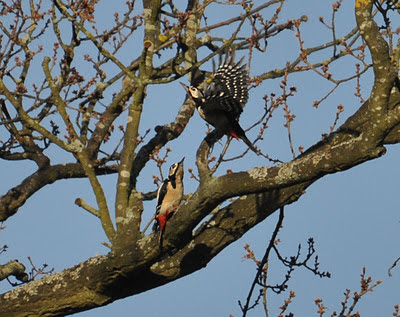 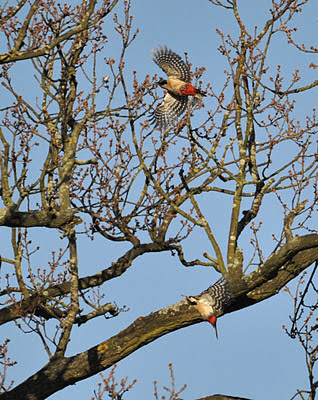 Itinerant Cormorants often rest in the tree providing the highest point of the lake area of Painshill Park. This was the first time however that I had seen as many as five there at the same time.


I could see (and hear) two Goldcrests working their way through a conifer, searching for insects and spiders for lunch. They ignored my presence, but they are so fast-moving that getting a good portrait while they are feeding is not an easy task. So I have about thirty pictures of brown blurs or tail-end views, and I have posted below the one shot in which an eye and a beak are visible, if somewhat obliquely.